Did you know that gut health is vital to overall health: physical, mental, emotional… everything?!

It doesn’t seem possible that gut health can have such a significant impact on every area of our being, does it? I know. I was skeptical too – until I actually looked into the research and started reading testimonials of people sharing their personal journeys back to wellness… starting with restoring a healthy gut microbiome.

Hi! My name is Diana Kelley. Before we continue, let me give you a little background information about myself and I how became excited to share the importance of gut health with others.

My initial interest in a healthy lifestyle began in earnest in 1994 when my ex-husband and I became engaged. His family was vegan; but, with a few more dietary restrictions added - such as abstaining from sugar, oil and yeast!

When I learned of this, I was thinking…

What is there left to eat???

Once I had a better grip on myself, I realized there actually is plenty to eat….all that was needed was to relearn how to cook. It was quite an adventure… I can’t count the number of loaves of bread and cakes that were totally inedible and went to the compost pile before I figured out what I needed to know! The transition would be a lot easier now, with the help of the thousands of recipes available online, but I only had a few cookbooks to work with and no internet back then!

While adjusting to this new menu we found out that I was pregnant! This truly encouraged me to continue this healthier lifestyle change, because I had really been struggling. I desperately wanted a piece of chocolate (which, I did not succumb to – even though it proved to be a major trial for me)!

Not only was I adapting to a new menu, I was introduced to living exclusively on solar power, and using alternative medicine. It was all fascinating – like being thrown back in time!

Since my ex-father-in-law was a chiropractor, I had ready access to a wealth of information on the subject of alternative medicine. And, I soon became comfortable with taking care of my family's cuts, bruises, colds and what-nots naturally - sometimes using nutritional supplements and herbs. Of course, being over an hour away from the nearest hospital was quite the motivator!

Early on, I heard of Hippocrates opinion...

All disease begins in the gut

What insight from thousands of years ago!

I cannot agree that ALL disease stems from an unbalanced gut health, but modern scientific research is confirming that a lot of life’s unpleasant health problems do.

With this discovery, gut health products have been popping up all over the place – even the doctor’s office! This would be great, but have you noticed that seemingly 90% of nutritional supplements are expensive… what’s a good word?... duds? What’s the point in using them if you don’t notice a difference, right?

I, personally, continue trying though, because I sincerely believe that our Creator has provided what we need to build the foundation for an abundant, healthy life in nature. Thanks to the miracles of advancements in food dehydration and packaging, we can try remedies from around the world without having to grow and preserve medicinal plants ourselves. Having done that, and tasted the bitter teas, I can honestly say that I am very thankful for modern nutritional supplements!

Not that there aren’t many miracles in modern medicine! It’s just that it seems that for decades, in most cases, the medical goal has been to treat the symptoms versus addressing the root cause of the illness in the way that ancient healers were taught. Yet, in the advancements of scientific research there is more and more evidence supporting those ancient teachings… such as the importance of gut health to the entire body!

Before gut health research, there was all sorts of research on the impact of stress on the body

Before I learned the important role of a healthy gut microbiome, my life had become increasingly stressful.

The Bible teaches not to align yourself with someone that you can’t agree with.

Can two walk together, except they be agreed?

Stress Effects Every Area of Life

Long story short, my ex-husband and I had the same end goals in raising our children to become good, productive citizens of heaven (and earth), but our methods differed, causing all sorts of friction – despite my attempt to obey my husband and still keep my identity. This friction (also known as STRESS), took a toll on both of our physical and mental health.

This is enough to break apart many relationships. In fact, I threatened to leave at least a dozen times in the 20+ years we were together. However, I always found a reason to stay just a little longer…

One of those times that I was ready to leave, my ex-husband had a severe heat stroke that nearly cost him his life. In fact, he has often bemoaned that it didn’t because it changed everything. We had to sell his thriving business that he started from nothing, move from the home that his family built together, and away from the mountains that he loved because his body couldn’t tolerate the heat any more. So, it was not surprising when he started having bouts of depression… so I stayed.

The Toll of Being Emotionally Torn by Duty

My mother died and I had to leave my father alone because it was my “duty” to return to my husband. Thankfully, the Lord had a woman prepared to become my father’s companion, so he wasn’t left alone for long. However, the depression that overpowered me was deep and terrible and lasted far too long.

I developed pseudo-allergies (all of the symptoms of an allergy without evidence of an actual allergy – the allergy test showed very little response) to grasses, hay, pollen, mold, and dirt. I also developed asthma, triggered by my “allergies”. It didn't help that my ex-husband was a hay farmer at the time! 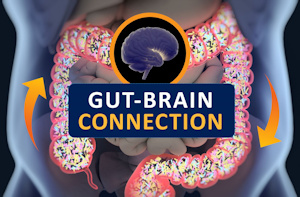 I started trembling like a person with Parkinson’s, but did not have it.

The stress was taking an obvious toll on my physical and mental well-being, though I didn’t yet know about the gut-brain connection and how my symptoms were an indication of unbalanced gut health.

My First Experience with Probiotics

About this time my ex-father-in-law read an article on probiotics and how gut health is linked to nearly every system in the body. So, we started taking probiotics… with no noticeable results.

I don’t know about you, but I expect to notice a change within a month of starting a product that claims it is for something specific. While it may take 3-4 months for “optimal” results, I think your body should give you some sort of encouragement to let you know you are on the right path.

Of course, I am a sensitive person and can recognize small changes in my body even when doing the simplest thing – like switching brands for a multi-vitamin! So, I may be expecting too much...

A person that I barely knew (and later became a friend) introduced me to gut health products from a different company, suggesting that they might help me with my growing list of health issues. Skeptical, I agreed to let her share success stories with me.

Improving Gut Health Was Set Aside

Although the stories intrigued me, I was a little distracted… You see, our oldest had been having mental health issues. Plus, she wanted to leave home as soon as she turned 18.

Since she and the rest of the family kept “locking horns”, and the general family opinion was that she needed to “straighten up and get over it” instead of helping her through, I agreed. I was thinking along the lines of moving in with a nearby friend… instead, my husband insisted that she move nearly 2000 miles away to my father’s home – in the hopes that that would give her proper perspective.

Her mental health worsened and she was diagnosed with schizophrenia. Others said she was demon possessed. For some reason, she didn’t want to return home…

I had hoped that by allowing this move, there would be less tension, and my ex-husband and my relationship would improve. For awhile, it seemed that it would all work out. I could tell he was trying to be less negative, so I stayed.

I stayed even after I needed to make an emergency trip to get my daughter out of a mental institution and became her emergency medical guardian, but she still didn’t want to come home and was staying with her boyfriend.

I stayed even after she got really sick, fell down a flight of stairs, and got amnesia and I wasn’t allowed to go visit because “there was nothing I could do”. (Later, I discovered that they really did need the help!)

However, after she recovered and decided that she wanted to get married and start a family, I said that I’d be there for her. Period. My ex-husband got offended and declared that it was cheaper to get divorced than for me to be gone who-knows-how-long each time she had a problem.

We both had reached our limits (no villains here). I couldn’t handle the thought of not being available to her if she needed me again. So, I left, taking my youngest with me.

Desperation Pushed Me Into Giving Gut Health Products Another Chance

A few months of not having perpetual tension was enough to reduce my constant trembling to only trembling when the situation at hand became strained. The Lord provided all our needs (including a caring man that later became my husband), but my anxiety level remained far too high.

Desperate to reduce my anxiety level, I tried the gut health products that my friend had introduced to me. The stories were soooo inspiring! Yet, I didn’t really expect to notice a difference… I figured there was plenty of hype involved (like with most companies).

Despite my skepticism, my mood lifted and energy level noticeably increased in just a few days! What a relief!

Over the next year, other areas were surprisingly effected with the improvement of my gut health

Needless to say, the benefits of gut health go far beyond dealing with digestion! Improving my gut health has been one of the best things I’ve ever done in my life, because the benefits have been phenomenal!

Coming Soon! Gut Health Benefits: What Are the Differences in Probiotic Strains?

Right now, I would like to invite you to learn more about the benefits that improving gut health can do by sharing some of the same stories (and lots of new ones!) that were shared with me.